Precast concrete is a construction product produced by casting concrete in a reusable mold or “form” which is then cured in a controlled environment, transported to the construction site and lifted into place (“tilt up“). In contrast, cast-in-place concrete is poured into site-specific forms and cured on site. Precast stone is distinguished from precast concrete using a fine aggregate in the mixture, so the final product approaches the appearance of naturally occurring rock or stone. More recently expanded polystyrene is being used as the cores to precast wall panels. This is lightweight and has better thermal insulation.

Precast is used within exterior and interior walls. By producing precast concrete in a controlled environment (typically referred to as a precast plant), the precast concrete is afforded the opportunity to properly cure and be closely monitored by plant employees. Using a precast concrete system offers many potential advantages over onsite casting. Precast concrete production can be performed on ground level, which helps with safety throughout a project. There is greater control over material quality and workmanship in a precast plant compared to a construction site. The forms used in a precast plant can be reused hundreds to thousands of times before they have to be replaced, often making it cheaper than onsite casting when looking at the cost per unit of formwork.[1]

There are many different types of precast concrete forming systems for architectural applications, differing in size, function, and cost. Precast architectural panels are also used to clad all or part of a building facade or free-standing walls used for landscaping, soundproofing, and security walls, and some can be prestressed concrete structural elements. Stormwater drainage, water and sewage pipes, and tunnels make use of precast concrete units.

To complete the look of the four precast wall panel types – sandwich, plastered sandwich, inner layer and cladding panels – many surface finishes are available. Standard cement is white or grey, though different colors can be added with pigments or paints. The color and size of aggregate can also affect the appearance and texture of concrete surfaces. The shape and surface of the precast concrete molds have an effect on the look: The mold can be made of timber, steel, plastic, rubber or fiberglass, each material giving a unique finish.[2]

Ancient Roman builders made use of concrete and soon poured the material into moulds to build their complex network of aqueducts, culverts, and tunnels. Modern uses for pre-cast technology include a variety of architectural and structural applications – including individual parts, or even entire building systems.

In the modern world, precast panelled buildings were pioneered in Liverpool, England, in 1905. The process was invented by city engineer John Alexander Brodie, a creative genius who also invented the idea of the football goal net. The tram stables at Walton in Liverpool followed in 1906. The idea was not taken up extensively in Britain. However, it was adopted all over the world, particularly in Central and Eastern Europe[3] as well as in Scandinavia.

In Australia, The New South Wales Government Railways made extensive use of precast concrete construction for its stations and similar buildings. Between 1917 and 1932, they erected 145 such buildings.[4] Beyond cladding panels and structural elements, entire buildings can be assembled from precast concrete. Precast assembly enables fast completion of commercial shops and offices with minimal labor. For example, the Jim Bridger Building in Williston, North Dakota, was precast in Minnesota with air, electrical, water, and fiber utilities preinstalled into the building panels. The panels were transported over 800 miles to the Bakken oilfields, and the commercial building was assembled by three workers in minimal time. The building houses over 40,000 square feet of shops and offices. Virtually the entire building was fabricated in Minnesota.

Reinforcing concrete with steel improves strength and durability. On its own, concrete has good compressive strength, but lacks tension and shear strength and can be subject to cracking when bearing loads for long periods of time. Steel offers high tension and shear strength to make up for what concrete lacks. Steel behaves similarly to concrete in changing environments, which means it will shrink and expand with concrete, helping avoid cracking.

Rebar is the most common form of concrete reinforcement. It is typically made from steel, manufactured with ribbing to bond with concrete as it cures. Rebar is versatile enough to be bent or assembled to support the shape of any concrete structure. Carbon steel is the most common rebar material. However, stainless steel, galvanized steel, and epoxy coatings can prevent corrosion.[5]

Precast concrete products can withstand the most extreme weather conditions and will hold up for many decades of constant usage. Products include bunker silos, cattle feed bunks, cattle grid, agricultural fencing, H-bunks, J-bunks, livestock slats, livestock watering trough, feed troughs, concrete panels, slurry channels, and more. Prestressed concrete panels are widely used in the UK for a variety of applications including agricultural buildings, grain stores, silage clamps, slurry stores, livestock walling and general retaining walls. Panels can be used horizontally and placed either inside the webbings of RSJs[6] (I-beam) or in front of them. Alternatively panels can be cast into a concrete foundation and used as a cantilever retaining wall. 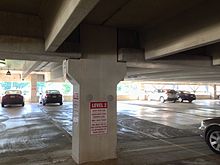 Precast concrete building components and site amenities are used architecturally as fireplace mantels, cladding, trim products, accessories and curtain walls. Structural applications of precast concrete include foundations, beams, floors, walls and other structural components. It is essential that each structural component be designed and tested to withstand both the tensile and compressive loads that the member will be subjected to over its lifespan. Expanded polystyrene cores are now in precast concrete panels for structural use, making them lighter and serving as thermal insulation. 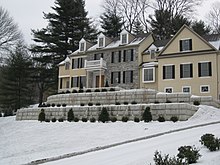 An example of a precast concrete retaining wall.